Spotify's agile organizational model is currently extremely fashionable. But what is behind the Swedish music streaming service's method? The following article explains what squads, tribes, chapters and guilds are all about. In addition, the advantages and disadvantages of the model are presented and differences to other forms of organization are shown. Furthermore, it is examined whether the Spotify model is also suitable for other companies. Finally, agile alternatives to the Spotify model are presented and a conclusion is drawn.

This chapter takes a closer look at the components of the Spotify model.

Organizational structure of the Spotify model

A squad is a multidisciplinary team that works in a self-organizing manner. A squad should combine all the competencies required to develop and implement a goal or project. As a rule, agile squads consist of eight to ten people. They are comparable to Scrum teams.

Squads do not have a team leader, as they control themselves. However, a so-called product owner (PO for short) is elected, who sets priorities for the projects / work. Squads work independently and autonomously: they choose their own organization and working methods.

The product owners of different squads in turn develop a roadmap that defines the strategic direction of the company. The individual product owners derive the product backlog for their team from this roadmap.

A Tribe consists of a group of Squads that are involved in the same product or service. They have one or more Tribe leads who are responsible for creating an ideal working atmosphere. Typically, all squads in a tribe have their offices in the same building to ensure good collaboration.

Part of a good work environment is that Tribes consist of no more than 100 people. With more than 100 employees, people cannot maintain a relationship.

At regular meetings, the squads of a tribe present their work.

As already mentioned, squads are multidisciplinary, i.e. they consist of members with different competencies. The so-called chapters, in turn, consist of employees with the same expertise - i.e., the same area of expertise. For example, a chapter may consist of application developers.

The purpose of chapters is to enable employees with the same expertise to share their experiences and challenges and to coordinate their efforts, e.g. in terms of technologies, tools, processes and methods. Regular meetings are organized by a chapter lead. The chapter lead is also responsible for supporting employees in their continuing education.

The chapters are more or less the specialist departments known in organizational structures. However, an employee's primary team is his or her squad. The chapter lead, however, is the disciplinary supervisor. The squad has no hierarchy - no team lead.

Similar to chapters, guilds consist of employees with the same expertise or interests. However, they are not limited to individual Tribes, but involve the entire workforce of the company.

Guilds can be seen as voluntary communities. They are not dictated by management and do not only exchange information on technical topics.

The difference to other forms of organization

The Spotify model is characterized above all by its departure from classic hierarchies. Autonomy is a top priority here. Managers still fulfill a disciplinary function - but not in the primary team (squad) but in the chapter - and there is a servant leadership style.

In the primary leadership team, the squad, there is no leader - rather a special role, the product owner (PO for short). The PO prioritizes the team's activities according to business value - value, result, benefit for the company. The cross-functional squad decides for itself how the tasks are to be performed.

Spotify itself describes its model as a "redesigned matrix organization."

The multidisciplinary structure of the squads prevents silo structures from forming. In this way, customer needs and satisfaction can be brought to the forefront - without team members competing. Everyone is in the same boat and wants only one thing: Create value

Another characteristic of the Spotify model is a corporate culture that is error-friendly or learning and experimenting. Risks may be taken in order to try out new things - mistakes can be reacted to quickly, as squads are fully capable of acting and are not dependent on the decisions of a manager.

Albert Einstein once said, "He who has never made a mistake has never tried anything new."

This culture of error goes beyond simply learning from failure:
All employees at Spotify have the opportunity to spend 10 percent of their work time trying new things. In this so-called hack time, employees can test new tools or methods and thus continuously develop their work processes.

Advantages and disadvantages of the Spotify model

The advantages and disadvantages of the Spotify agile model are examined below.

The following advantages arise from the Spotify model.

The following disadvantages of the Spotify model.


Is the Spotify model also suitable for other companies?

In principle, the agile Spotify model is suitable for many companies. At the same time, the introduction is only recommended from a certain minimum size, because employees who may have previously been responsible for several (sub-)projects, (sub-)products, or (sub-)services from the specialist silo. A squad member should not also be part of another squad - with the exception of experts, who tend to have an advisory function.

In addition, the model should be adapted to the individual needs of a company. However, this requires a certain degree of tact and a lot of experience with the Spotify model.
In addition, it is more a matter of understanding, internalizing and living the principles and philosophy behind the model.

The Spotify model stands for autonomy through alignment - about the benefit or purpose. Therefore, the purpose of the company is also central, so that everyone is working in the same direction, with the same goal in mind.

Furthermore, Spotify's organizational model is based on agile methods in order to meet the constantly changing challenges and to be able to react quickly to them. Scrum and Kanban are options for this - at the same time, teams are encouraged to test other methods and recommend them if successful - for example, via Guilds.

As touched on earlier, the open learning and failure culture is a key success factor for Spotify. It's not about finding someone to blame for mistakes, but reacting to them as quickly as possible before any major damage is done and learning from them - and above all, not making the same mistakes repeatedly.

Spotify encourages its teams to experiment. Creativity is expressly encouraged! In dedicated hack or hacking time, they can take the time to evolve their workflows.

The Spotify model should not simply be copied. A company is too complex to initiate an agile transformation without adapting the changes exactly to the existing organization. This may require external experts.

For this reason, Spotify's model should serve as inspiration rather than a blueprint for your own organization. The above-mentioned values and principles provide orientation for embarking on the path toward agile and autonomous working.

The network organization turns away from classic structures. It is organized in a process-oriented manner and does not require a classic management style. Here, the team spirit and the benefit for the customer are always in the foreground.

The teams work on their own initiative and responsibility. This ensures agility and autonomy.

In addition to the Spotify model, there are other forms of network organizations: for example, holacracy and sociocracy 3.0. In holacracy or sociocracy 3.0, teams are self-organized in circles through roles. The circles are hierarchically structured. Circles of a lower level are in turn part of a circle of a higher level.

Among other things, there is the special role of the lead link / circle lead (holacracy) or leader (sociocracy), which can best be compared with the role of the product owner or with the role of a project or team coordinator. She/he keeps track of the purpose, goals, and strategy of his/her circle. In addition, the lead link represents the interests of the parent circle.

There is no supervisor. The organizational forms are very similar. Holacracy is a paid license model and Sociocracy 3.0 under the Creative Commons Attribution - ShareAlike 4.0 International License. Both models are much more complex than the Spotify model.

Approaches to agile working are possible to varying degrees in all of these forms of business organization:

Companies already working according to agile methods can also benefit from the OKR method as an efficient strategy implementation and goal management system. Objectives and Key Results - the "successor" of MbO - is applicable to all organizational forms.

Every company can learn something from the Spotify model. However, anyone who wants to blindly force their company into this framework - without individual adaptation, without a transformation process and without experienced experts and coaches to accompany the process - is doomed to failure. Squads, tribes, chapters and guilds can be an enormous asset to companies.

The lesson to be learned from Spotify's success and other companies' failures in trying to adopt the organizational model rashly is this:

Copying supposed best practices is not effective in contexts as multifaceted as a corporate organization. It is necessary to analyze the needs and framework conditions of one's own company and to develop customized solutions: Starting with the individual team cut, the team responsibility, the team composition, up to consulting and coaching the teams for their optimal working method and coaching the executives in their new role as "servant leader" is critical for success.

Remember that Darwin's Law (or Megginson's Theorem) does not only apply to species. It also applies to companies: "It's not the strongest or the smartest that will survive, but those that adapt the fastest." And the Spotify agile model is a much better alternative for most companies than the traditional, rigid and hierarchical organizational structure.
Topic: Organizational Model Agile Methods
Share article: 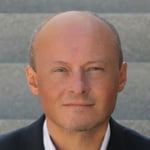 Erno Marius Obogeanu-Hempel has been a visionary, thought leader and recognized expert in the fields of digitalization, strategy, OKR, digital transformation and innovation for more than two decades - inspiring people and advising companies. He has already successfully implemented the Spotify model at several companies. Through his numerous work stays in Silicon Valley, he has experienced a digital mindset and learned new methods and approaches. He is a book author, university lecturer, keynote speaker, founder and CEO of the consultancy digitalwinners. Learn more about OKR: https://okrexperten.de/

While Gartner forecasts overall annual worldwide IT spending to decrease 8% in 2020 due to the...

Since it unveiled its document-based Digital Access model last year, SAP has been encouraging...

As an SAP® customer, you may feel increasing pressure to move your ERP systems to cloud-based...